sometimes when i’m driving i think about my roadtrip, and i picture myself driving down some unrecognizable highway.  i glance down at my ipod for a second, and when i glance back up i’m about to hit another car.  i hit the car, which hits another car, and then we’re all in a fiery car crash that kills everyone.

this is just one of the many things keeping me up at night.  small consolation: at least i die in the car crash, too, so i can’t be sued by my many victims.  other consolation: now i’m never going to look at my ipod while driving.

my friend yanda made a site called ringtone soup.  i’ve found most other ringtone sites to be confusing at best, utterly incomprehensible at worst.  yanda’s site is neither.  i like it.  he did not pay me to say that.

i made myself an ipod case.  it was pretty easy; two layers of fabric, one layer of fleece in between, and some clear vinyl i cut out of an old cosmetics case.  if anyone wants the pattern, let me know and i’ll send it. 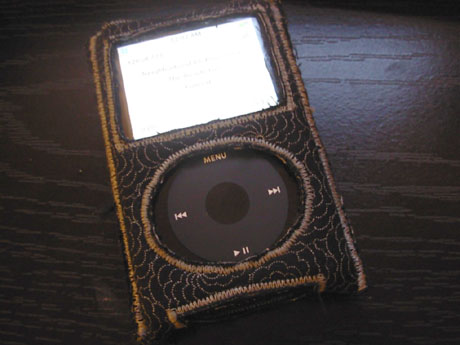 i had a bad week at work, so i went out drinking friday night.  on saturday my body took revenge by giving me the worst sinus headache i’ve ever had in my life.  that’s saying a lot, as i’ve had many sinus headaches in my time.  this one was nauseatingly bad, and the only thing that helped was putting a really hot washcloth on my face and trying to take a nap.

when i get sinus headaches, i often picture my sinuses getting larger and larger inside my head until they explode out my face.  it’s gross.  maybe the headaches would go away faster if i didn’t think of them that way.

matthew baldwin wrote a piece on his website based on a number i chose at random which corresponded to an idea in maggie’s book.  i spent more time than was necessary choosing a random number.  the first number i thought of was 37, but i rejected it because i thought someone else might choose it first.  then i thought about 45, but that didn’t work since it’s divisible by five.  numbers divisible by two or five don’t seem very random, do they?  so i went with 71, a fine choice since it made for a good story on matthew’s part.  thanks, 71!

i wore contact lenses for a long time, because i hated wearing glasses.  then i ran out of contacts and bought some new glasses.  they broke a few years later, and i spent several months wearing these terrible granny glasses i bought in 1999.  i bought another new pair a month ago, and they’re the best glasses i’ve ever had.  i feel like me again.  see? 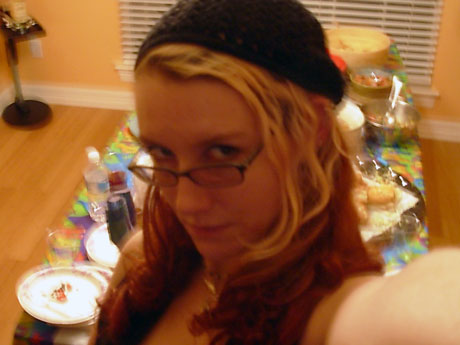