the other night i went to work trying not to go to work. what i mean is that i spent all afternoon calling my coworkers, trying to get someone to take my shift, because i think i had the whooping cough. or maybe it wasn’t the whooping cough, but some funny-colored stuff was coming out of my lungs for sure, so that’s how i knew it was bad. nobody could work for me, though, so there i was at work, trying not to go to work, with my technicolor lung butter.

i was standing near the kitchen when i heard the door open. that’s one thing i like about my restaurant, that the front door squeaks when it opens, so you can always tell when a customer’s coming or going even when you’re not watching. but i heard the door open, and i looked up, and my favorite literature professor was coming in, pushing a man in a wheelchair. the two of them sat in someone else’s section near the front of the restaurant, which was good because it would be way too awkward to wait on my former professor, but i thought maybe i would go say hi to her later. she liked those photos i took of quentin’s bridge, maybe i could tell her about when i went to see faulkner’s house.

i went into the waitstation where priscilla was pouring iced tea into glasses. “that lady at 38 was my favorite professor at U of H,” i said.
“really?” she said.
“yeah,” i said, “except i’m afraid to go over there because i don’t want to have to tell her that this is what’s become of me.”
“aww,” priscilla said as she picked up the glasses and walked out, “this isn’t what’s become of you.”

still hiding in the waitstation, i grabbed the schedule clipboard off the wall and looked at my shifts for the next week. “oh, no!” i said to one of the other waiters, who had come in and was leaning against the counter. “i asked off next friday and saturday, but i’m scheduled to work both nights.” 1
“oh yeah?” he said, not looking at me.
“yes,” i said, though i could tell he wasn’t interested. “and i bet there’s nobody who can pick up for me, either. i’m so tired of working here.” 2
“then why don’t you quit?” he said.
i looked up from the clipboard and he was staring at me, his look challenging. “it’s not that easy,” i mumbled, unable to articulate anything else. he walked away then, leaving me alone in the waitstation. 3

later, of course, i came up with a thousand and one better things to say, things both sarcastic and sincere, but mostly sarcastic.
you don’t think i look for jobs every single day?
oh, yeah, because my other career is going so well.
i’m so glad life’s that easy for you.
why would you say something like that?
well, i am having trouble fitting in my many job interviews.

but i didn’t say any of that then, because i couldn’t, because that was when i realized something. standing alone in the waitstation, hiding from a former professor, i realized that the clipboard in my hands contained a sheaf of papers which comprised the only plans i have for the rest of my life.

lately, every time i run into someone i haven’t seen in awhile, my response to the inevitable “how’ve you been?” is always a succinct “bored,” and my response to “what have you been up to?” is “nothing.” i choose to say “bored” and “nothing” because discussing the concept of boredom is, to me, preferable to discussing the x-files episode i just watched, or that sweatshirt i made into a skirt. how many hours i spent on the internet. the marginally-funny thing the dog did.

but in all the times i heard myself explain to people that i don’t really do anything, the boredom always felt temporary. this period in my life was just a natural step on the road to better things, right? it wasn’t permanent. right? after all, i spent a lot of time assembling, categorizing, and reviewing mental photographs of myself doing these better things. me walking to work on a chilly morning in a different city, me taking the dog for a walk in an unfamiliar park, me on the subway, me in a bar with a group of friends. me in my new apartment, working on something. these photos, i’d assumed, were my future.

i hung the clipboard back on the wall and stared at the schedule, my eyes filling with tears. nothing, i thought to myself, nothing i’m doing right now is going to make those photographs a reality.

after checking on my customers, i asked someone to keep an eye on them while i went to compose myself. outside in the back of the restaurant, with the grease traps and firewood and empty boxes, i sat down in a plastic chair and took a few deep breaths. several yards away, the chicken scratched methodically at the ground. i observed her process with interest: she would scratch the gravel with her feet, peck at whatever she had unearthed, and then scratch again. scratch, peck, scratch. i watched for awhile longer, wondering if i could find some significance in her actions. deciding there was no significance to be found, i went back inside.

and i worked. i talked to people and brought them drinks and food and processed their credit cards. i avoided the front of the restaurant as best i could until the professor left. i said hi to freddy, who was sitting near the bar. “i like your hair bondage,” he said. i wanted to tell him it was the only thing holding my brains in. i wanted to tell him about the thing i’d just realized, because i thought it might help. but i didn’t.

mostly, though, i thought about siegfried and roy. i saw that special the other day where maria skeletor interviewed them about roy’s tiger mauling and his subsequent surgeries and rehabilitation and his new outlook on life. i found the whole thing to be pretty cheesy for the most part, but there was this one scene where siegfried was talking about the strength of his and roy’s relationship, and something he said (i can’t even remember what it was) was so sweet and genuine that i almost cried, just a little bit.

of course i berated myself for it immediately, because, jesus christ, what the hell kind of person cries during a siegfried and roy special? at the time i’d decided i was crying because that kind of emotional bond is pretty touching and in some ways enviable, no matter how sequin-spangled it may be. in retrospect, though, maybe i was crying with envy because siegfried and roy had jobs.

footnotes:
1. the schedule situation has since been fixed.
2. the problem isn’t really the restaurant, though, is it? it’s me.
3. this situation has been fixed as well. we talked it out, things are okay, etc.

two separate conversations i had at work sunday afternoon with a fellow waitress, one while she was typing in an order at the computer: 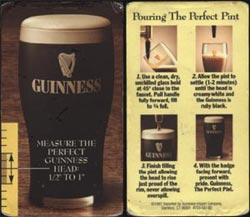 …and one while we were sitting at the bar having lunch:

sarah (noticing my open wallet):  what’s that?
me:  oh.  that’s my guinness card.  pouring guinness was my favorite thing when i used to bartend.  i liked to make each one perfect.  i’d pour it halfway, and let it settle, and then pour the other half, and i’d always make sure the top was perfectly smooth.  i even have a picture of one of my customers posing in front of a guinness i’d poured.
sarah:  could you do the clover thingy? 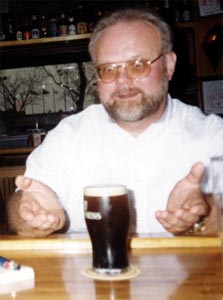 me:  no.  i could never figure out when to start making the clover, so the glass would always overflow before i was finished.  i could make an “A,” though.  anyway, my boyfriend at the time gave me that little card because he knew i liked to pour guinness, and i’ve kept it in my wallet ever since.  i guess it’s been in there since 1999.
sarah:  you like to do things for a long time, don’t you?
me:  what do you mean?
sarah:  well, earlier you said you’ve been a double every sunday for three years.
me:  yeah.
sarah:  and you’ve kept this card in your wallet since 1999.   you do a lot of things for x amount of time.
me:  hey, you’re right.  yeah, i guess i have a lot of those.

scene:  a family of three — young parents about my age with their five-year-old daughter — and an additional teenaged girl come into the restaurant and sit down at a table for four.

me:  hello, how are you?  can i get you all something to drink?

teenaged girl:  i’ll have a sprite.

me:  okay.  (to the five-year-old) what would you like to drink?

five-year-old:  do you [something unintelligible]?

her dad:  honey, she’s not into anime.  she likes indie rock.